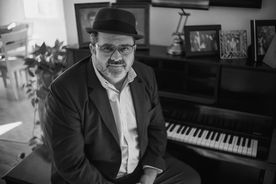 As a jazz pianist Bronson has had the great fortune to learn from the best. Bronson has studied with Dave Kane, George Colligan, Barney McAll, Ron Elliston, and Bill Boublitz. He’s shared the stage with Parliament/Funkadelic, G Love and Special Sauce, and Charlie Hunter to name a few.

Bronson has traveled up and down the east coast playing in a number of regionally successful funk and reggae groups. Locally Bronson has played with some great players like Steve Sachse, Nasar Abadey, Mike Noonan, Walter Cosby, George Jones, Wes Crawford, and Eric Cathcart.

In 1999 Bronson began his career in broadcast television. He started working as a cameraman for Chris Matthews and Tim Russert, and soon moved to graphics playback for Nightline and ABCNews. After taking a course at the Corcoran Design School, Bronson switched to motion graphic design and he hasn’t looked back. Bronson has produced video pieces for the likes of Michelle Obama, the BBC, and Marriott. He’s currently an Adobe Certified Instructor and teaches regularly.

When Bronson isn’t working or practicing, he stays busy tending to his lawn in rural Montgomery County, MD. He has a wonderful wife, two teenage sons and he’ll sleep when he’s dead. 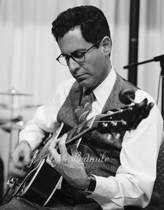 Craig Gildner ~ A dynamic guitarist, pianist and male vocalist blessed with perfect pitch. His love affair with Jazz and with the Beatles started very early in life and  passion for both continues. The Jazz bug hit Craig for good in 1986 while a DJ at a local jazz station in his hometown of Elkhart, Indiana.

Craig moved to D.C. in 1991 to pursue a future in audio recording. Two years later, a performance by the Tom Cunningham Orchestra at a Middleburg, Virginia wine festival presented him with an unexpected opportunity to join the band as pianist, vocalist and occasionally guitar.

Craig formed Blue Sky 5 in 1999 with musician friends who frequent the swing scene’s dance floor. The quintet became an instant hit on the D.C. and Baltimore swing dance scenes.

In addition to Blue Sky 5 and the Tom Cunningham Orchestra, Craig has had the pleasure of performing with regional and national swing artists, such as Bill Elliott, Paul Cosentino, Casey MacGill, Big Joe Maher, and Johnathan Stout. He formed The Greg Gildner Trio with James Fowler and James Herron. Greg also often plays with Brazilian guitarist Beto Rodriguez.

When not hunched over his Baldwin upright working out an arrangement, Craig enjoys the pursuit of refining his dance style a la Dean Collins, cycling, cooking, collecting old movies, and adding items to his arsenal of vintage clothing. 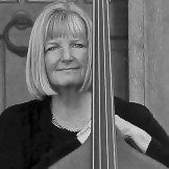 Cyndy Elliott ~ A life-long resident of the Washington DC area, Cyndy Elliott currently works as a freelance bassist, performing many different styles of music in big bands, small combos, orchestras and chamber ensembles. Cyndy is the co-leader of Swingtopia, a jazz octet.  She has performed at many of the major venues in DC, including the Atlas Theatre, Bethesda Blues and Jazz, Blues Alley, Bohemian Caverns, Twins Jazz, and the Terrace Theatre, Millennium Stage, and Concert Hall at the Kennedy Center.

Cyndy has had the honor of working with several renowned musicians from the big band era, including Tex Beneke, Ray Anthony, and Maxine Andrews, and two of the original Mills Brothers, in addition to doing short tours with current versions of the Artie Shaw, Harry James, Jimmy Dorsey, Sammy Kaye, and Les Brown orchestras.  Locally she has enjoyed working off and on for many years with the Tom Cunningham Orchestra and the Hank Levy Legacy Band, among many others.

Cyndy spent a number of years “on the road” touring with the big band show “In the Mood” and the Broadway musical “Meet Me in Saint Louis.”  She did residencies in North Carolina, Pennsylvania, and Massachusetts playing bass and piano with the all-women “Swingtime Canteen” show, in addition to being a frequent sub during its off-Broadway run.  Cruise ship work took her to the Caribbean, Central America, and all over Europe.  She toured Australia and New Zealand with a jazz trombone ensemble and performed in nine cities throughout China with the Park Avenue Chamber Symphony.

Cyndy earned a Master’s degree in Jazz Studies from the University of Maryland in 2009.  As a graduate assistant she directed a number of ensembles and taught beginning jazz theory and improvisation. Cyndy received a Bachelor of Music in Piano Performance and Pedagogy from Converse College.  She had a 25 year career as a piano teacher and adjudicator with many award-winning students at the state and local level and earned permanent certification. In addition, she taught theory, ear training, piano, and voice in pre-college programs at Converse College, American University, and Montgomery College. 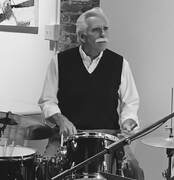 James Herron ~ An accomplished jazz drummer and percussionist from Washington, D.C. and founder of The Abbey Road Jazz Ensemble.

James Herron began playing drums at age 11.  He enjoyed years of study with the late Bill Reichenbach (Drummer for Stan Getz and Charlie Byrd).  James graduated with awards in music from Charles W. Woodward High School and continued his studies at Montgomery College. He performed with the Montgomery County Orchestra and MC Stage Band.

James Herron is an award winning Actor and Voice Actor.  He provides narration for multiple TV series, Documentaries, Film and Public Television programming, and works regularly with some of the nation's most revered advertising agencies and motion picture studios.  James works from his home studio in addition to the nation' s finest recording and production facilities.

Wayne Wilentz ~ A pianist, keyboardist, vocalist, composer and arranger, who lives and performs in the DC area. He is a highly regarded jazz musician who specializes in Brazilian music, but is also known for his versatility, vast repertoire and professionalism.

Born in NYC, Wayne was a member of Atlantic, Capitol and RCA/Salsoul recording artists “Skyy” for 9 years, and received a Gold Record for their LP “Skyyline”.

He toured internationally including Europe, Africa and the United States, playing in such venues as Radio City Music Hall, Hammersmith Odeon in London, The Cotton Bowl, The Greek Theater and the Capital Center. Wayne also played regularly with Rock and Roll Hall of Famers “The Coasters”.

As a jazz musician he has shared the stage with such stars as Howard Alden, Chuck Redd, Hendrik Muerkens, Giacomo Gates, Vanderlei Pereira, Claudio Roditi, Rebecca Parris, Richie Cole, Norris Turney and many more. He was known for a long collaboration with legendary DC vocalist Pam Bricker, which produced a Wammie winning CD entitled “U-topia”. He has also done many sessions over the years for “Thievery Corporation” and their label ESL Music.

As a composer, along with works for “Skyy” and his own recordings, Wayne’s music can be heard on such TV shows as “The Mindy Project” and “Elementary”.  Wayne teaches piano and vocals at the Washington Conservatory of Music. He is also the musical director for The Capital City Voices, the premier jazz choir based out of DC.